well, it was an extremely close game vs blob guard. i made a huge mistake by not realising that you can disembark from scythes at over 6". However, the super robots stil pulled out a sneaky win.

I love the use of Obyron and 2 more veilteks; it just gives so much more flexibility and i like the jumpy jumpy concept and I think this will gorm the base of my list.

I also need to kill damn aegis lines first. Overall though I am happy with the basics.
Will post an updated list when i have worked something out

Tried the list noted below yesterday for my first game ever with or against the new 'crons against my friend's Nid army.

Turn one and two went extremely well but everything started to fail a little and had a horrific turn 3.

Won quite convincingly overall though... I LOVE jumpy shenanigans and the particle tomb blades- awesomesauce, particularly when twin-linked!

I struggle with killing 2+ armour though so I am going to change stuff about a little.

I have a 1750 game against a good friend at our new FLGS in Bristol (the awesome Vanguard Wargaming) tonight either against guard or Dark Eldar.

We are playing using the comp rules from Bristol Vanguard's Vanquish tournament. I am taking:

Will update
Posted by Nerdophobe at 04:09 No comments:

With 5 nearly fully painted armies available for the Storm of Iron tounament in less than a month, I have decided to ignore those and paint a completely new army.

This image has sparked an idea for me; I am going to paint a 3000 point necron army a stage at a time, using primarily weathering and an airbrush 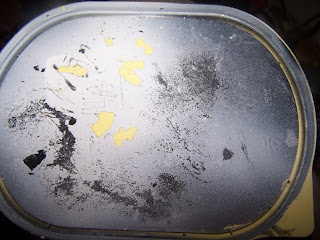 Some good points, some bad but I think I can get the technique working after my clover lid tester^.

Anyway, off for a game now. Trying out a funky jumpy 2k list.

Against my friend's Nids. Will update how it goes

Posted by Nerdophobe at 00:56 No comments:

It's official! Examinations are horrific!

I have one more on Thursday then I am away for the weekend.

After that I am tempted to see if I can get a full 3k army painted in a 2 week period alongside full-time study.

If I go for it, it will be necrons. I am thinking of painting with 80% airbrush/weathering with hairspray and see how it goes.

Will post more if and when I officially decide. Watch this space
Posted by Nerdophobe at 08:38 No comments:

I am not ignoring this new blog; I have exams this week and next week and my life has been consumed! Will update when I can. I am having 1 week of solid hobby (and the occasional lecture) after exams.
Posted by Nerdophobe at 05:06 No comments:

Numbers next to the models mark priority. 1= high, 5 = low. This is based on what I need for tournaments/games etc


If I paint the above, I have working, relatively competitive armies for Eldar and CSM. I'll update with progress. Now, sadly, back to revision!

Posted by Nerdophobe at 05:53 No comments:

The great power of to-do lists AKA Me trying to actually finish stuff!

I have collected models for this ridiculous hobby for 23 years and have accumulated an absolute tonne of stuff despite regular Ebay purges. I have accepted that I switch from project to project frequently and will, if I continue like I am at present, probably never have a fully painted army I am happy with. I like to have everything, for every list, in high numbers just in case I need them for a fully painted, 10k-a-side, Apocalypse game in front of cheering super-models (none of these elements will, sadly, come to frution!). I remember an article in Jervis' ramblings a year or so in White Dwarf about the 'Collecting' side of the hobby and this is certainly one of my 'pulls' with wargaming. I guess my parents starved me of toys when I was younger...

I also enjoy switching lists about and, particularly with the invention of allies, end up painting things from a variety of different armies at different times. The result of this is I always feel a little sadfaced about my hobby when I look at my bits and pieces; nothing is finished and it feels like nothing is going to be finished!

On top of this, I seem to 'waste' an awful lot of time thinking  about doing hobby stuff rather than actually doing it. I can happily spend hours devising weird and whacky conversions and picturing the precise paint scheme my next unit will be splattered with. However, despite having a LOT of ideas, very little gets done.

Before I begin to explain my attempt to combat the above issues, I also feel that being realistic is also important. Retraining as a lawyer does not allow much spare time for geeking around so I am looking at a few hours per week on average. Also, I am not expecting to finish everything by next week; this is planned to be a long task that achieves my goal: to have some finished stuff.

My plan is to organise and best-exploit my hobbytime with the use of prioritised to-do lists. I am not a particularly organised person and actually using these in real-life situations has allowed me to get more organised and, to a limited extend at least, sort myself out. The same must happen with my hobby if I use the same idea.... Right?

To-do lists seem such a simple idea but if you're like me and typically write nothing down, they can be really useful.

I am going to ignore my Fantasy armies for now as I have yet to play a game of 8th Edition so it would be a waste of time.

Chaos Marines: Tonnes of the stuff. I have about 4k painted and another 5k or so unpainted.

Eldar: Quite a bit, mostly painted to an acceptable standard. Not quite finished

Space Marines/Dark Angels: about half painted by the friend I traded them from.

On the Overlord's Facebook group (awesome podcast), members have monthly hobby goals to adhere to. This is really what got me thinking about how to best reoganise my hobby time and it's the basis for this idea...

Whilst I am going to structure my to-do-list by priority rather than time, it still follows essentially the same idea.

My first priority/cut-off date is a tournament I am attending on 20th February. I am stil unsure what I want to take and could get various armies ready for this.
Posted by Nerdophobe at 05:33 No comments: